Tempus and his Sacred Band of Stepsons prepare to take the Wizard War to the Mages of Wizardwall in this gripping story set “Beyond Sanctuary.” With Jihan the Froth daughter at his side, Tempus and the core of the Stepsons ride into the embattled town of Tyse, where they find friends and foes among the witches, wizards, and warfighters. From the first full length novel inspired by the Thieves’ World (R) series, “Mage Blood” takes you into unknown realms fraught with unimaginable peril. 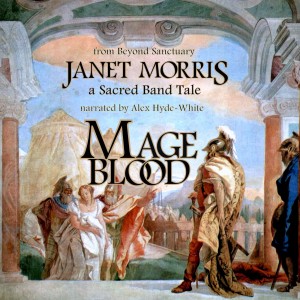 Hear the Stepsonsspeak in the Audiobook edition of Mageblood, from the Beyond Sanctuary Trilogy.

It’s July 17th, 2012, and B&N has put our newest Sacred Band Tales volume, “the Fish the Fighters and the Song-girl,

And here’s a short except from “the Fish the Fighters and the Song-girl”:

After the battle for the land of dreams, the losers straggled by threes and fours and sixes toward an ochre-walled city.  They were dazed and hurt and lost in a strange country, with no way home.  Some once were warriors from Macedon and Mygdonia and Megara and farther realms.  Some were deserters who’d thrown away their shields and run.  Some, abandoned, wandered off when the war was done.  Some were conscripts, helots and slaves who’d dressed the soldiers and milled their grain and served their pleasure.  Some were dreamers from Meridian, waking from nightmares ages long; some were dead and resurrected to fight the dream lord’s foredoomed war.  All were hungry, desperate and confused.

“What poor citadel is this?” said one big fighter to another man as their group of six limped and stumbled from a hayfield onto a road leading to the city gates.  “It’s not anywhere I know.”

“Who cares?” said a third fighter, a woman just as big and just as tall and just as armored.

“We will make our way here,” said a smaller, stout woman who used a broken javelin as a walking stick.  “Trust in me.  All cities are alike.  But hurry.  We want to be in before dark.”

Behind her, a girl in a maiden’s short skirt sang quietly of a hero and love and glory.

Then the last man said, “Cavalry.”  He dropped to his knees and put his ear to the road.  “Lots of them.  Coming fast from the north.  Hide.”

Join us for the interview with Janet Morris about “The Sacred Band.”