Storm Seed by Janet & Chris Morris, is #7 in the Sacred Band series and this new release is the Author’s Cut edition from Perseid Press. 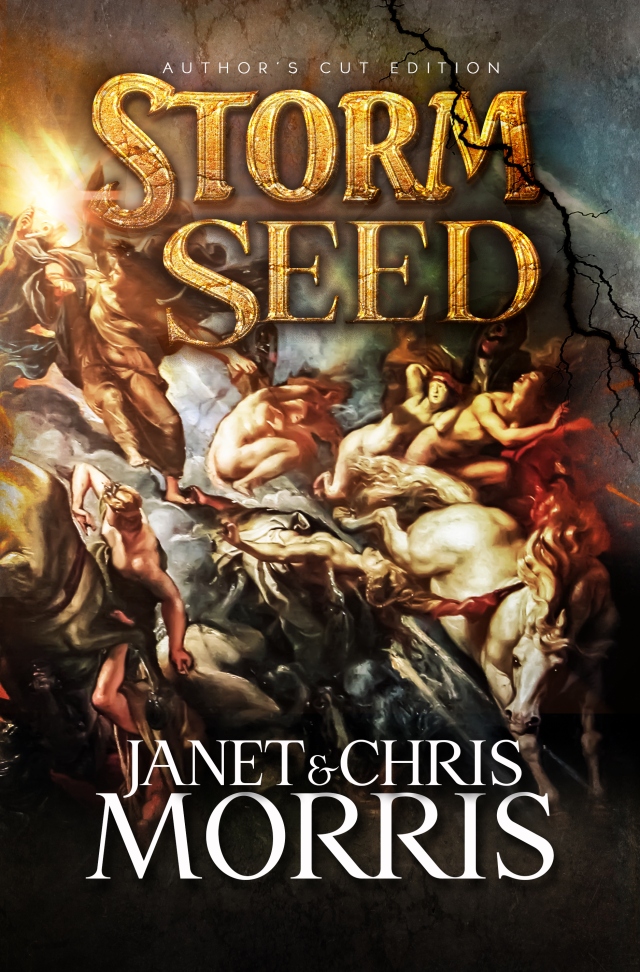 Andrew P.  Weston says:
“What do you think might happen when a precocious immortal child who has never felt a father’s love throws a tantrum?
Or when an obsessed witch who has sold her soul to profanity fixates on the object of her desires, setting out to possess him at any cost?
What about the daughter who has fought long and hard to be accepted as an equal in a man’s world?
Or the lover, desperate to be taken seriously as a soulmate and partner?
In Storm Seed, you find the answers to all these questions – and more – as the avatar of the storm god Enlil gathers his scattered forces from the length and breadth of the universe to do battle on faraway Sandia.
But things are not as they seem and events both desperate and foul conspire against the Sacred Band in an effort to weaken their resolve. They contend with foes lurking within the heart, enemies that are just as deadly as those waiting for them in the darkest recesses of the alien stronghold; face tests of loyalty, to themselves, to each other and the very tenets by which they live; endure hardships severe enough to crush the spirit.
And then there’s the legend himself. It would seem even Tempus isn’t immune to the consequences his choices bring.
“Storm Seed” a superb example of how to write an action adventure that bridges the divide between science fiction and fantasy, and a classic that will endure the test of time. I loved the pace and intensity of this storyline. It keeps you riveted from the moment you start and doesn’t let go until the last page.”
Get your copy of Storm Seed in deluxe trade or digital editions at Amazon and everywhere . . .
https://www.amazon.com/dp/B0768F7K6Z/
https://www.amazon.com/Storm-Seed-Sacred-Band-7/dp/0998268747/
https://www.amazon.com/Storm-Seed-Sacred-Band-7/dp/0998268747/