My review of High Couch of Silistra, (The Silistra Quartet, Book 1), is here. The first three volumes of the Silistra Quartet had more than 4 Million copies in Bantam print when the fourth volume was released.

The series was translated into French, German, and Italian editions. The series is built on the premise that biology is reality, and much of human behavior is hard-wired.

High Couch of Silistra was the first book of its kind, mixing science fiction and fantasy with metaphysics and hotly debated issues of sexuality, and many of its truths are as controversial today as when the series first appeared in 1977, and has spawned generations of imitators.

The Silistra Quartet is based in Greek mythology, but its civilization has never heard of the planet Earth. People of color make up the heroes and main characters in this series.

The Battle of the Sexes is never over…

Estri, the Well-Keepress of Astria and High Couch of Silistra, the highest office in the land, has continued her quest to locate her god-like “Shaper” father to his home planet, Mi’ysten, where she is tested and shown to have inherited his powers.

Following further training in the ability to manipulate time and probabilities with her mind, Estri is abruptly returned to Silistra after an absence of two local years. Many changes have taken place in the power vacuum her absence left and Estri must conquer her immediate captor, Chayin, Cahndor of the violent Parset desert tribes, in order to continue her quest to save the Silistran people who are dying out from infertility.

Chayin rejects their offer, knowing it will end in the destruction of his people from greed and power. The BF keeps counting on at least one tribal leader’s greed to eventually agree to accept their offer, allowing one tribe to conquer all others with off-world weapons.

Estri and Chayin must find Sereth, former Slayer of Estri’s home who aided her in beginning her quest and was made outcast afterward (because Estri disappeared under his protection). Estri, Chayin and Sereth must join in a triad, forging a bond created by their innate powers and intense love to assure the future of the planet.

After they defeat Chayin’s various tribal opponents, they conquer Estri’s enemy of hundreds of years, her father’s grandson, Raet, and hope they can have a respite from tribulation. However, Khys, the semi-mythical, usurper overlord of the planet, abducts the triad to his sacred city and binds Estri with a device that suppresses her powers and causes her to lose her memory.

With Estri in his control, he elevates Chayin to be his puppet overlord of all the Parset, but leaves active Chayin’s own in-born powers that may drive him insane. Khys forces Sereth into the role of a “trusted” vassal who remembers everything about Estri, Chayin and their pasts.

Helpless before his power, Chayin and Sereth cannot stop Khys from impregnating an unsuspecting Estri to take advantage of her “Shaper” genetics. Khys gloats, triumphant in assuring himself a powerful and gifted heir, while believing no being in the universe is powerful enough to deny him what he truly desires: return of the technology that nearly destroyed the planet and forced the population underground into “hides” until their world recovered enough from the devastation to support life again. For a time, he’s correct…

Estri, the heroine of High Couch of Silistra, a/k/a “Returning Creation, ventures further than she ever has before into this exotic and sensual fantasy novel. Here she meets Chayin, price of an alien culture, and discovers more about her past, and future. Full of passion and adventure, this is the second book in the Silistra series of four volumes.

High Couch of Silistra was reviewed by the New York Times Sunday Book Review with great enthusiasm (June 26, 1977), and created a firestorm of controversy and a genre of imitators.

All four books were published in French, German, Italian, and other foreign-language editions, as well as multiple editions in the States. The German covers are the best. 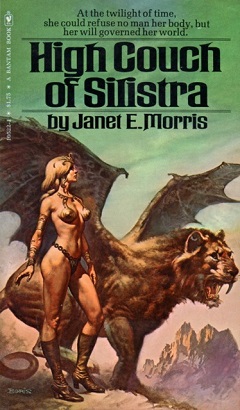 Be warned: the main characters are all bisexual and very smart.

Janet Morris lets you choose how deep you go: read it for the titilation of the body, or of the mind. By the time ‘Wind from the Abyss,’ third volume in this series appeared, rival publishers were welcoming their authors “to the pantheon of Janet Morris” in full color posters and splashy ads.

See where sexual liberation and strong female characters really got started in science-fantasy. But be warned: Estri is no male in high heels.

Get inside the feminine psyche as never before or since as Estri gains power and begins to wonder what her limits are, and how powerful women can co-exist with their male counterparts.

A fully realized culture, complete with a language and mythology and ethos different from any other, rounds out the series.

Remarkably realistic, considering its content and the driving philosophy behind the tales, there’s never been anything like the Silistra series before or since.

I am deeply tempted to simply write, five stars, place a period, no, an exclamation mark after the word “stars”, and thusly be finished with my review.

Tempted, yes, but I won’t do that. Not just yet.

Let me put two questions to you, dear reader(s):

My recommendation is that you purchase the book, based on its literary merit.

You would probably think you had woken up in the world described in this book. At least, its primary subject matter, low fertility rates, is still holding up pretty well. It’s consistent with what Janet Morris explores in this series.

In fact, we could go ahead and call Janet Morris a prophet. In today’s world, according to the United Nations Data Booklet “World Fertility Patterns” (2015), birthrates in developed countries are declining. Global fertility is now 2.5 children per woman.

I must ask the question: How does a woman have half a child? Impossible, I know. We’re talking statistics here, and such things are possible. Let me quote directly from that booklet:

“Fertility patterns in the world have changed dramatically over the last few decades.Global fertility has reached unprecedented low levels…” (end of quote) What is even more worrying is the fact that “nearly half the world lives in below-replacement level fertility countries.”  Let me give you the facts straight from page 6 of the report:

“Today, 46 per cent of the world’s population lives in countries with low levels of fertility, where women have fewer than 2.1 children on average. Low-fertility countries now include all of Europe and Northern America, as well as many countries in Asia and Latin America and the Caribbean.

Another 46 per cent of the world’s population lives in “intermediate fertility” countries that have already experienced substantial fertility declines and where women have on average between 2.1 and 5 children.

The remaining 8 per cent of the world’s population lives in “high-fertility” countries that have experienced only limited fertility decline to date. In these countries the average woman has five or more children over her lifetime. Most of these countries are in sub-Saharan Africa.” (end of quote)

So, as I said before, author Janet Morris is a prophet. She got out her crystal ball one day and looked into the future. She saw a world in decline, fertility rates dropping, the population getting older and older, and the birth rate unable to keep up with the mortality rate.

I think it’s not necessary for me to tell you that under these circumstances, the human race would eventually become extinct. What this book does is imagine the desperation of living in such a world. The ability to procreate, to have children, would bestow great wealth and power to individuals with this biological blessing.

This nightmarish scenario is one of the many global problems our leaders are supposed to be working on. Failure to do so would condemn the human race to extinction. It’s as simple as that. Therefore, you will understand my recommendation for anyone interested in a medical career, social services career, or a public administration career to read this book. It’s a fantasy that could turn into a nightmare.

Intellectually and emotionally, this is challenging reading. On a third level, it is enough to take one look at the book covers to understand that it can not avoid dealing with human sexuality, in all its forms. Why? Because for the inhabitants of such a world, what will be uppermost in your mind is having sex, not so much for pleasure, although we humans are “hardwired” that way, but for procreation. The idea behind all the fornication is to save the human race, and at the end of the day, that’s quite a noble undertaking.

And this is the point where I will conclude this book review by saying, five stars!

For this last section, please indulge me dear reader(s), but I’m not going to go to the author’s bio on Amazon for this feature. I’m going to do what any self-respecting reviewer would do, who has a deep admiration and respect for the work of the author who he is reviewing. I’d like to share with you something pesonal about this author who has given me countless untold hours of reading pleasure. 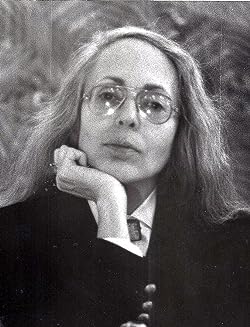 Janet Morris began writing in 1976 and has since published more than 40 novels, many co-authored with her husband Chris Morris or others. Her debut novel, written as Janet E. Morris, was High Couch of Silistra, the first in a quartet of character-driven novels with a female protagonist.

According to original publisher Bantam Books, the Silistra quartet had over four million copies in print when the fourth volume, The Carnelian Throne was published. Charles N. Brown, Locus Magazine, is quoted on the Baen Books reissues of the series as saying, “Engrossing characters in a marvelous adventure.”

She created, orchestrated, and edited the Bangsian fantasy series Heroes in Hell, writing stories for the series as well as co-writing the related novel,The Little Helliad, with Chris Morris.

Most of her fiction work has been in the fantasy and science fiction genres, although she has also written historical and other novels.

Her 1983 book “I, the Sun“, a detailedbiographical novel about the HittiteKing Suppiluliuma I was praised for its historical accuracy.

O.M. Gurney, Hittite scholar and author of “The Hittites,”commented that “the author is familiar with every aspect of Hittite culture.”

Morris has written, contributed to, or edited several book-length works of non-fiction, as well as papers and articles on non-lethal weapons, developmental military technology and other defense and national security topics.