Jim Morris (James Franklin Morris) :  Jim Morris served three tours with Special Forces (The Green Berets) in Vietnam. The second and third were cut short by serious wounds. He retired of wounds as a major. He has maintained his interest in the mountain peoples of Vietnam with whom he fought, and has been, for many years, a refugee and civil rights activist on their behalf.

His Vietnam memoir War Story won the first Bernal Diaz Award for military non-fiction. Morris is author of the story from which the film Operation Dumbo Drop was made, and has produced numerous documentary television episodes about the Vietnam War. He is author of three books of non-fiction and four novels. He has appeared on MSNBC as a commentator on Special Operations.

Now, here is Jim’s review of The Sacred Band by Janet Morris and Chris Morris:  http://www.amazon.com/review/R3J14RSVNACDDL/

This book makes a terrific case for reincarnation. Not that reincarnation is a theme, it’s just that I find it hard to believe that it was researched in a library. I find it much easier to believe that the authors have an intimate familiarity with the world of The Sacred Band through repeated lives as both man and woman, warrior and sorcerer/sorceress. Some of what I love about it is that the warriors seem like the warriors I know, even though they are from thousands of years earlier. Supernatural happening abound, but they don’t seem made up; they seem perfectly natural, and the supernatural beings have the same kinds of personality quirks as the rest of us. 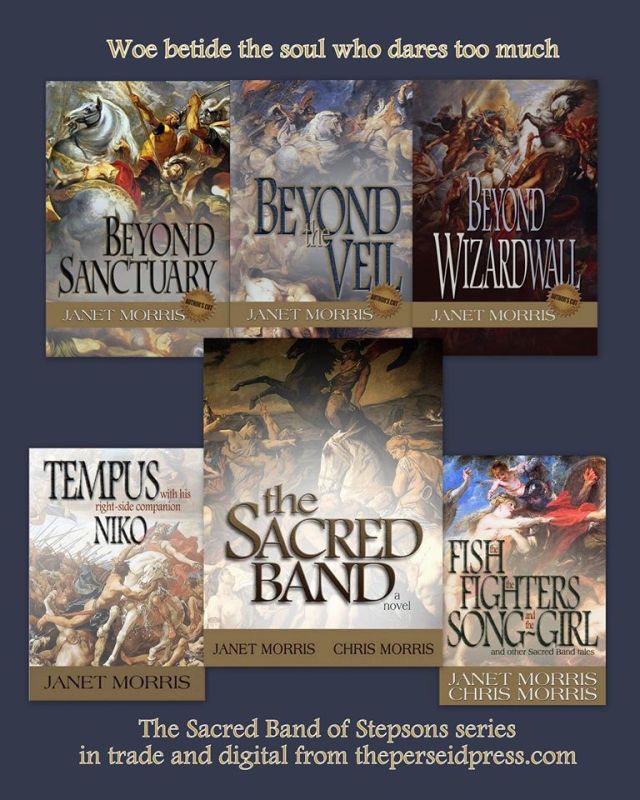 “I can’t say enough good about the prose. It’s perfectly suited to the story in word choice and in rhythm. It wouldn’t be better suited if it were written in heroic couplets, but even so it’s a smooth and facile read.
“I do have one problem. Daily life kept dragging me into the mundane world and out of the one I had chosen to inhabit for as long as I could. I know there’s a prequel out there somewhere, probably Thieves World, and I’m going to find it.

“If you like adventure and magical realism I know of no place where better is to be found.”

To learn more about The Sacred Band, capstone in the Sacred Band of Stepsons series, you’ll find it on Amazon, Barnes & Noble, and everywhere in hardcover, deluxe trade paper, digital format, and an audio book edition on Audible.com.  http://www.amazon.com/The-Sacred-Band/dp/B00N1YRVH2/