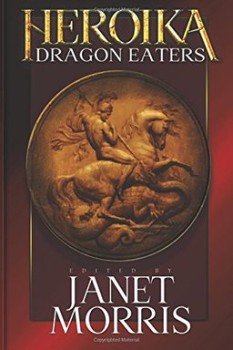 For the past several months I kept seeing notices for the coming release of Heroika 1: Dragon Eaters. Edited by Janet Morris, one of the true heavies in heroic fantasy, and someone I have known online for several years now, I knew this was a book I was going to be reading. That its table of contents included several writers I’m a big fan of as well as many whose names I’m starting to hear good things about made it look better and better. That it’s about killing dragons sealed the deal. So when John O’Neill asked if I wanted to review it and I could have an e-book of it, I said “YES!”

I’m happy to report that with all that buildup, it’s a terrific bunch of stories. Anthologies are great because you can pick them up and dive in anywhere and take a short, rewarding excursion into whatever genre it is. I generally don’t read anthologies from cover to cover in a short period of time. Reading for this review it turned out I wanted a break from dragon-killing when I tried to finish the book in only a few big sessions. There are a few stories that aren’t to my taste, but there are no clunkers and some real treasures in this book.

The stories, and there are seventeen of them, are presented chronologically — well, the ones set in the real world anyway. Those set in more fantastical settings are fit in among the medieval ones. In the earliest tales dragons stand toe-to-toe with the gods. Slowly, they lose that stature and become mere monsters. Deadly, true, but no longer forces of raw, elemental chaos. Eventually they’re regarded only as mythical. In the future, scientific explanations have to be found for their existence.

Janet and Chris Morris’ “The First Dragon Eater” opens the book. Narrated by Kella, a priest of Tarhunt, it tells of the battles between the Storm God, Tarhunt, and the dragon, Illuyankas. Taken from Hattan myth, it’s probably one of the earliest tales of dragon-killing. The story’s style — formal sounding, as if something recited in a temple — lends gravitas to the introduction of the monstrous worms that figure in so many world myths and fantasy stories.

“Legacy of the Great Dragon” by S.E. Lindberg moves forward into ancient Egypt, as Thoth, physician of the gods, helps Horus to find power to avenge the death of his father, Osiris, at the hands of Set. This is a wild piece, with a cosmically huge dragon and gods fighting inside of it.

The Morrises return one more time with “Bring Your Rage.” Set in Greece’s Heroic Age, hunting a dragon is a chance for a group of warriors to prove their mettle.

Thoas, the lame and grizzled Achaean, pushed the thrown stone aside with his toe. “War is brewing, stranger, thus have I called this hunt. Here we stalk dragons to find the strongest, the bravest among you northerners, to fight at Troy. What’s to lose? Your life. What’s to win? Your legend — your aristeia, to be claimed in my contingent on the battle lines at Ilion. I am Thoas, son of Andraemon, lord of Aetolia. I seek only the best of you barbarians to ship with me.” 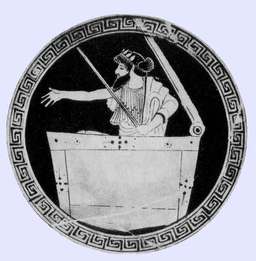 The brutal hunt is recounted by by Penthesilea, queen of the Amazons, who has come looking for death in battle after she accidentally killed her sister. Her telling is stirring and memorable.

In “Aquila of Oyos” by Walter Rhein, a dragon is undone by trickery and arrogance.

Cas Peace’s “The Wyght Wyrm” brings a Christian warrior, Jorj, to the Isle of Wyght. There he faces off against a dragon called up out of the past by Druids hoping to restore their old dominion over the British Isles.

After years of hunting and killing other dragons, an aged warrior has finally found the one that killed his family in “The Old Man on a Mountain” by Jack William Finley. It’s tight and tough, and you can feel every ache and pain as the dragon slayer climbs to his prey’s lair.

“Of Blood and Scales” by A.L. Butcher is a complex tale of politics, magic, and griffin-riding dragon-hunters. I found it a little too long, but the terrific aerial battles against the dragon more than made up for that.

Deadly jaws snapped shut just short of the griffin Julius was flying, tugging a feather from its wing as Julius steered it away, trying to deflect the beast’s attention from his friend. Once more Hawk dived past the dragon’s nose, seeing Rufus steering Bloodsnap around and upward. He hoped his griffin was faster than that dragon, its last attack had barely missed him. Perhaps, he thought, the sight of Rufus would be his last vision, save the inside of a dragon. 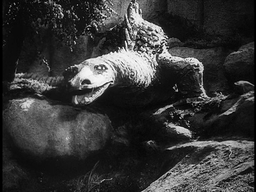 Dragons appear as malevolent servants of pagan rule in ”Night Stalkers” by Travis Ludvigson. Sent to break the spirit of the pagan Saxons, Charlemagne’s champions, Roland and Ogier, find themselves up against monsters summoned out of the darkest pits. This is one of my favorites in Heroika. Faced with the prospect of several dragons, the warriors are forced to develop a plan of attack and then build a team and train it. It’s a great mini-epic with bloody dragon rampages under the eaves of dark German forests.

On a forest battlefield littered with Saxon and Frankish dead, Roland and Ogier meet their first dragon:

Tendrils of acrid smoke rose from the deep hole in the earth, carrying a putrid odor that caused several warriors to retch.

Following the stench was the sound of something large scraping against rock, growing steadily louder as it neared the surface. As the sound from the hole increased, Roland called the men together to form a shield wall and ready their weapons.

As they watched, an enormous scaled talon reached up from the hole and grasped the edge, rending the stone apart. This was immediately followed by a nightmare from the darkest depths of the underworld: a dragon.

No longer a personification of cosmic immensities, nor simply a beast to fight, in “Forged” by Tom Barczak, the dragon is an insidious manipulator hiding his true form in the guise of a man. He’s a positively satanic figure, and it’s not steel and strength that are required to fight him, but love and sacrifice.

In J.P. Wilder’s “The Rhyme of the Dragon Queen,” a band of dragon-hunters marches off to slay an ancient dragon harrying the town of Devasta. It felt over long, but the final confrontation with the monster is exciting, with the added bonus of a pair of mind-blowing reveals.

“The Dragon’s Horde” by Joe Bonadonna is a great, pulpy, creep-inducing story of genocidal war between mankind and dragonkind. While humans killed all the dragons five centuries ago, they were unable to destroy their dragonmen servitors. Now, the enemies live on either side of a mountain pass, in a constant state of battle. From their fortress, and possessing superior arms and discipline, humans have managed to keep the dragonmen mostly to their side of the pass. When the dragonmen successfully attack they take the heads of those they kill and steal off with any children they can grab. For centuries this has been the way of things.

When a priestess shows up at the fortress and claims a new dragon queen is about to be born all that changes. Guided by her goddess, she must assemble an expedition and enter the dragonman-infested wasteland beyond the pass and find the unhatched queen.

Bonadonna is a deft hand at writing fast-paced, bloody action, and there’s lots of that in “The Dragon’s Horde.” But he’s also good with atmosphere and mystery. Of the the last, there are several in the story. The darkest involves the eating of the dead dragonmen by the human warriors after each and every battle. Like I said, creepy stuff.

In “Wawindaji Joka (The Dragon Hunters)” by Milton Davis, the hidden connection between dragons and those who hunt them is revealed. Davis is skilled at creating introspective warriors like this story’s protagonist, Jimbia. More than the dragonhunt itself, which is done well, the core of the story is how Jimbia is transformed by it.

“Against the Sky Tomb of the Earth Kings” by M. Harold Page gives you just what the title says: a giant flying mausoleum filled with corpses. Then it gives you an airship, a crew of mercenaries, and of course, a dragon. Page brings the biggest, most brutal battles toHeroika, as an entire city is laid waste. This is great, wild storytelling.

“Red Rain” by William Hiles is the first story in the collection to step out of pure fantasy and into the modern world. Union soldiers in the western Virginia mountains find themselves up against one thing they never expected — a dragon. Hiles does a good job depicting how the soldiers must first accept the frightening reality of what they’re facing, and then how to kill it.

“La Bétaille” by Beth W. Patterson is my favorite story in Heroika. Her prose is often beautiful, wonderfully evoking the wild Louisiana swamps and their denizens.

Pichou, a young girl in Cajun country, is the only person who realizes something is secretly working evil on the people of her neighborhood. She soon discovers that her opponent is a vast, dark power that hides deep in the swamp bending things to its will.

The reptiles were heading toward an enormous boat the like of which she had never seen before — a boat as big as her cousin’s trailer.

Then a glowing white light appeared in its upper window. A divided partition rolled slowly left and right, scanning the water.

This was no boat. It was the head of the biggest alligator Pichou had ever seen. But it couldn’t be…Perhaps it was a dinosaur? Like a coelacanth, thought to be extinct for eons.

Impossibly, “Fire on the Bayou” sounded in her head as the reptile’s giant mouth opened, disgorging searing flame into the night. 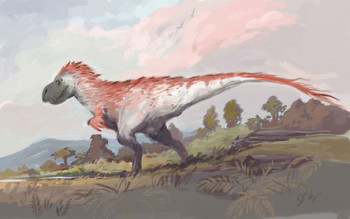 Pichou is a great character, bold and determined, and I’m hoping to read more of her adventures in the future.

Bruce Durham’s “Arctic Rage” is a post-apocalyptic dragonhunt story. In the near future Earth is overrun by dragons, nuclear winter blankets the world, and the remnants of humanity have been pushed into the farthest North. This one’s got a mecha in it, so that’s great.

Heroika’s closing story, “Sic Semper Draconis” by Mark Finn doesn’t have any dragons at all, but it does have a completely up-to-date feathered T. rex. A massive time portal has opened in the southern hemisphere and flooded the Earth with dinosaurs. Long and tough experience with them has allowed humanity to more or less handle them. More or less.

Too many anthologies pick a tone and then it doesn’t vary from story to story.Heroika avoids that. Connected by the themes of heroism and dragon-fighting, it allows room for varying styles of mythic tales and heroic fantasy as well as all-out pulp craziness.

I’m excited to see so many stories, so many of them quite good, together in on place. I’m a fan of anthologies and there aren’t enough of them for my tastes. We’ve all read that fantasy readers only want long novels and that not enough people buy anthologies. Janet Morris has done a great job and is to be commended for taking a chance and getting this out before the public.

Perhaps the best thing about Heroika is that number 1 in the full title. Right now Morris is hard at work preparing the next volume, to be subtitled Shieldless. If you’re like me, that sounds pretty awesome.

2 comments on “We’re honored by the review on Black Gate of Heroika 1: Dragon Eaters”