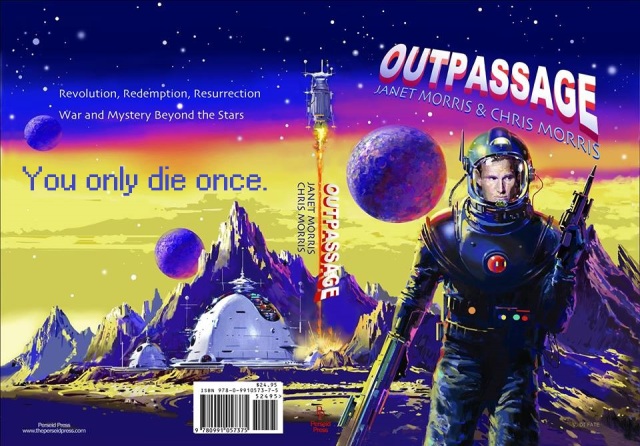 You only die once…

Outpassage Review on Book Vira, 4/8/2014:
Sgt. “Det” Cox has just spent three years under psych observation on Earth; now that he’s out-system, he isn’t about to tell anyone he’s seeing aliens again. Paige Barnett has lost everything, even her name, because she knows too much about the rebellion spreading through the Earth-Space mining colonies. Together Cox and Barnett stumble upon the mystery at the revolution’s heart and learn why the rebels are willing to die for it. Is their discovery humanity’s worst threat or greatest gift? The authorities are willing to destroy whole planets to keep the revolution’s secret from reaching Earth What’s to stop them from destroying two people?

Proffering an intriguingly plausible vision of a near future, Outpassage is the new SF epic from authors Janet Morris and Chris Morris. An exceptionally well written tale that weaves powerful ideas, highly visual settings and a brilliantly conceived plot, it has all the elements of great Science Fiction, but it’s the mechanics of storytelling that really set it apart. Too many books in the genre simply seek to overwhelm with increasingly farfetched technology and outlandish characters, but Outpassage serves up palpable depth that encourages readers to reflect on the essence of our humanity. Yes, reality is altered, but when worshippers of an alien life form seemingly adopt the power to resurrect themselves, it provides for intelligent musings, reflections, and more than a little soul searching. All brought to the fore with an acerbic pen, visually powerful prose and vivid characterization.

Combining oodles of adventure, masterfully paced action, plenty of intrigue, suspense and tension, there is more than enough to sate the appetites of the most ardent SF fans. A real page turner from authors Janet and Chris Morris, Outpassage is recommended without reservation!

Authors Janet Morris & Chris Morris – In The Spotlight
bv back1